The Planet of the Apes video slot is a NetEnt game that landed in the lobby of many online casino PA in October 2017. As you probably guessed it, its themed around the movie franchise owned by 20th Century Fox. So, If you’ve noticed this new video slot in the lobby of PlaySugar House Casino or Parx Casino and you’re curious to know more about it. Then, you should read this review. On this page, you’ll find essential game information and statistics so that you can make the most of your casino session.

Summary of The Planet of the Apes video slot features

Pros and Cons for playing Planet of the Apes video slot

What’s great about The Planet of the Apes Rise and Dawn video slot?

What’s not so great about The Planet of the Apes Rise and Dawn video slot? 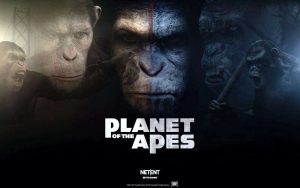 Of course, because the theme is so well-known, players expected a lot of this game. Honestly, the player’s opinion is a bit split when it comes to this new release. But we think that NetEnt did a great job and the game is true to the theme and delivers a lot of action. It’s worth knowing that Planet of the Apes is a pretty volatile game. So you’d be wise to claim a casino bonus to have a longer casino session. As for all volatile
games, you can expect fewer small wins and big one instead. Especially if you play on a max bet of $200. Finally, this slot has a good hit frequency of around 22.7%. Which means you can expect to win something every 2 spins out of 10. Make your own opinion today and try it at Parx or PlaySugar House casino.