Secret of the Stones video slot is a new NetEnt game that appeared in the casino lobby of PlaySugar house early in 2018. Even if this game was recently released in PA Casinos, it’s worth knowing that in fact it was released in 2013. If you’re familiar with NetEnt, you already know that they’re in the process of obtaining the seal of approval of the Pennsylvania Gaming Commission for some of their best games. So you can expect lots of new releases in the coming months. Secret of the StonesTM had a lot of success 5 years ago when it landed in European casinos and still does today. Because the bonus features are true crowd pleasers. Of course, as for all NetEnt classics, players can expect high-quality graphics that have not aged. So, if you’re keen to know more about this fabulous game, read what’s next

Summary of Secret of the Stones Video Slot features

Pros and Cons for playing Secret of the Stones video slot

What’s great about Secret of the Stones video slot?

What’s not so great about Secret of the Stones? 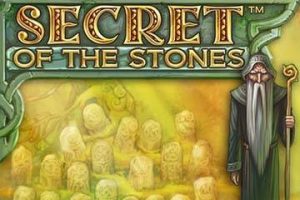 In short, it perhaps lacks the glitz and glam that the latest NetEnt release like Bloodsuckers 2 and Emoji Planet have. But the game features make for an interesting gameplay.

All and all, we think that Secret of the Stones is a well-balanced game. First and foremost, the max coin win isn’t bad at all for a 25 paylines slot. However, If you were looking for a game with a larger jackpot, you should consider playing Divine Fortune or Pyramid Quest for immortality. They’re both NetEnt games and one has a progressive jackpot worth over $155,000 (on average) and the other one has a max coin win of 3,600,000, which isn’t bad at all. Keep in mind that if you wanted to play any of these games with real money they’re available in the lobby of PlaySugar House and they’ll even give you free cash on sign-up to try these awesome slots.